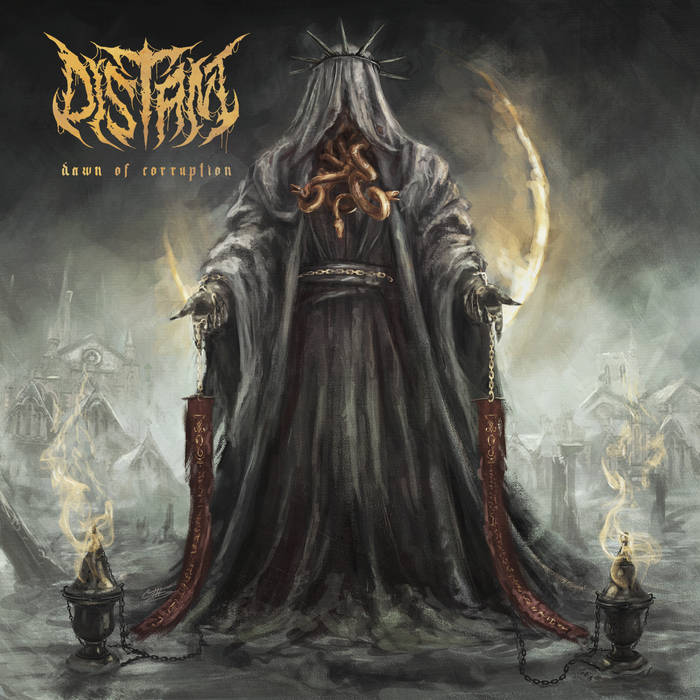 Obstacle of Affliction Well just fucking fuck!
That is my official assessment.
This is fucking pulverizing! Favorite track: Oedipism.

Jeremy K To be honest I've grown a little tired of deathcore, but some bands just stick out to me. Distant is one of them. I was hesitant about getting this EP at first but it fits so well next to Tyrannotophia. Amazing album.

Stephenectomy Best deathcore release of the year by a mile. An absolute relentless onslaught of heaviness, sick riffs and breakdowns! Dawn Of Corruption is worth checking out if you enjoy heavy deathcore and metal in general. \m/ Distant never seems to disappoint! Favorite track: Temple of Taglaroth.

Dive into the new dreadful chapter of Tyrannotophia with the story of Gabraath, the son of Tyrannt and heir to the throne at the ''Dawn of Corruption''.

Distant is a Downtempo / Deathcore band from Rotterdam, the Netherlands 🇳🇱.
After numerous tours around Europe and their debut EP “Tsukuyomi” in ‘17, Distant now took it to a next level by signing to Unique Leader Records. Their first album “Tyrannotophia” was released in ‘19. The EPs “Dawn of Corruption” (‘20) and “Dusk Of Anguish” (March ‘21) sequel the band’s lore-based dark story🌙 ... more

Bandcamp Daily  your guide to the world of Bandcamp

outré black metal, with a Victory Over the Sun interview and music from Liturgy and Jute Gyte.